Private tour of Petrozavodsk on foot

Our guide will meet you in Gagarin Square at the exit from the railway station with a sign “NordicTravel”. The tour will cover the most prominent places and events of the history of Petrozavodsk.

Panoramic tour of Petrozavodsk on foot

Become acquainted with the city’s most famous landmarks, including:

Gagarin square with its railway station building dating back to 1955, an example of the late neoclassical style in architecture.

The main street of the city – Lenin Avenue – that has two oldest wooden buildings of the city kept untouched since the beginning of the XX century.

Lenin Square named the Circular Square in the past due to its form. Now it houses the Museum of the Local History with splendid exhibitions of artifacts related to the different historic periods of Karelia region.

Karl Marx Avenue (former English Street) being populated mainly by foreign engineers during the reign of Empress Catherine the Great.

Kirov Square with the Monument to Kirov, an eminent political figure of the 1920s-1930s, that hosts three theaters and the Museum of Art.

The Peter I Statue positioned near the place where the first armament factory was founded in 1703 by the order of Tsar Peter the Great.

The lake waterfront with an excellent view of Onega Bay and numerous wooden and metal sculptures along it.

The area of historic houses wh ere the buildings of the end of the 19th and the first half of the 20th century are situated.

The tour ends in the city center.

During this tour you will visit the following sites 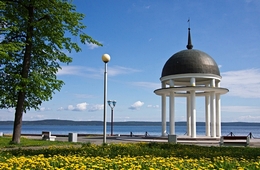 The city of Petrozavodsk was founded in 1703 and today it is an important centre of tourism in the North-West of Russia.