The whole city of Veliky Novgorod is a big museum; there are many well-preserved monuments dating back to the 11th century and later centuries. The historical monuments of Novgorod and its environs are enlisted in the UNESCO World Heritage List.

It is quite difficult to determine the exact time of founding of Novgorod. It is officially believed that it was founded in 859. For a long time Novgorod was one of the most influential and wealthy cities in Russia. Now the city is the administrative center of the Novgorod region and the city population is about 225,000 people.

In ancient times, Novgorod, located two kilometers from the place where the Volkhov river flows from Lake Ilmen, was divided into two parts or sides: Sofyisky on the left bank and Torgovaya (Trade) on the right bank of the river Volkhov. The city center was the Kremlin, or “Detinets” on the Sofyisky side. The Novgorod Kremlin is considered to be the center of this part.

Novgorod Kremlin and its sights

Novgorod chronicles attribute the construction of the first stone fortress to the year of 1044. The Kremlin stands on the bank of the Volkhov River, its walls are 1487 meters long, 6,5 meters wide and 15 meters high. Nine towers of the Kremlin have survived.

According to one of the versions, the fortress was called “Detinets” (Kids’ place) because when the enemy attacked, the children (deti in Russian) hid beyond the walls.

St. Sophia Cathedral is located on the territory of the Kremlin. It is believed that it was built in 1045-50 and that it is the oldest church in Russia. VIP guests, ambassadors were met in the cathedral, peace treaties were signed there and the royal treasury was kept inside.

On the central square of the Novgorod Kremlin, in front of the building of the Public Offices Chambers, there is a monument “The Millennium of Russia”. This monument was erected on September 8, 1862 in honor of the millennium anniversary of Russian statehood. The monument depicts the figures of the most prominent people in the history of Russia at that time. The cost of the construction of the monument reached half a million silver rubles.

The main exhibitions of Novgorod Museum are located in a two-storied building of Public Offices Chambers on the territory of the Kremlin. The most interesting parts of the exhibition are the collection of Russian icons of the 11th – 19th centuries, birch bark manuscripts, handicrafts, military equipment and other artefacts from ancient times till the end of the 17th century.

Trade side and Yaroslav’s Courtyard

The Trade Side is located opposite the Kremlin, on the other bank of the Volkhov River.

In ancient times the southern part of the Trade side was called Yaroslav’s Courtyard. There was a palace of Prince Yaroslav the Wise, who was the former Prince of Novgorod and then he became the Grand Prince of Kiev. Now this place is occupied by the old St. Nicholas Cathedral (1136) and by several more churches.

On the river bank trade was conducted and the shops of ancient market were located. Novgorod was an important trading center, as it had connections with Europe along the Volkhov River, Lake Ladoga, the Neva River and the Baltic Sea. There was a Hanseatic trading yard of foreign merchants in Novgorod. The main export items were fur, wax and leather. Many items were imported, including silver and gold, cloth, salt, wine and many other goods.

In the 17-18th centuries, Gostiny Dvor was built on the place of the market. Now its only remains are represented by the Arcade of the Gostiny Dvor, one of the major sights of Veliky Novgorod. Unfortunately, the Gostiny Dvor shopping arcade itself was dismantled in the late 1940’s - mid 1950’s.

To the north of Yaroslav's Courtyard, wealthy citizens settled. There is a legend that on the corner of Moskovskaya and Rogatitsa streets there was a house of Martha Posadnitsa (Martha Boretskaya), one of the leaders of the resistance to Moscow hegemony of the late 15th century. It is said that an underground passage was going from her house to the Sofyisky side under the Volkhov river.

Near Yaroslav's Courtyard there is Ilyina Street, which hosts the ancient Church of the Transfiguration of the Savior on Ilyin (1374). It is famous for the frescoes of the Byzantine and Russian master Theophanes the Greek. The church is open to visitors in summer in dry weather and in winter and during rain it is closed so that humidity does not damage the frescoes.

In close proximity to this church there is Znamensky Cathedral (1688).

South of the Kremlin, on the left bank of the Volkhov River, St. Yury’s Monastery is located. According to legend, it was founded in 1030 by Prince Yaroslav the Wise after the victory over the Chud people. For a long time the Monastery was one of the richest in Russia and it was used as the burial place for Russian princes and princesses. St. Yury’s Monastery fell into decay after 1764 as a result of the secularization reform of Catherine the Great.

In 1825-1827, thanks to Countess Anna Orlova-Chesmenskaya, the spiritual daughter of the Father Superior of the Monastery of Photius, a significant reconstruction of churches and buildings was carried out, a hospital for monks and a hotel for guests and pilgrims were built.

The museum of wooden architecture is located not far from St. Yury's Monastery in the outskirts of Novgorod. The museum was created in 1964. On the territory of the museum one can see traditional wooden structures of Russian north such as churches, chapels, houses and windmills. According to the museum report of 2020 some objects are under reconstruction. 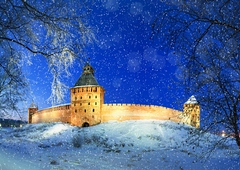