The historical Karelian villages of Kinerma, Rubchoila and Manga. Description of the sights and excursions.

Kinerma is probably the most known traditional village in the north of Russia. First mentioned in the historical chronicles in 1496, Kinerma is a nice example wooden architecture. The most striking architectural monument is the chapel of Our Lady of Smolensk, built in the second half of the 18th century. The icon of Our Lady of Smolensk from this chapel is exhibited at the Museum of Fine Arts in Petrozavodsk.

The Ershovs’ house was also built in the second half of the 18th century. Other houses belong to the 19-20 centuries.

In 2016, Kinerma was added to the Association of the Most Beautiful Villages in Russia.

Each year, various historical and cultural festivals and holidays are held in the village.

The following tourist services are organized in the village for guests.

1.       Sightseeing tour with a walk around the village, visiting the chapel of Our Lady of Smolensk and the exhibition "Life in Kinerma" in one of the historical houses.

3.       Master class "One piece of dough - three pies." During this master class, we make “kalitkas” with millet or potato, “sulchins” with semolina, as well as so called “son-in-law pies” - sweet, crunchy with sugar, and soft, with rice. We bake them in the oven and serve the pies with tea or coffee. This master class takes about 2.5 hours, so we recommend it for the guests who are going to stay overnight in the village.

4.       A master class on making of a traditional Karelian doll "Rvanka".

Rubchoyla village is located to the west of Petrozavodsk. The distance from Petrozavodsk by road is about 77 km.

The village was founded in the 18th century. Currently, 8 buildings are preserved in Rubchoyla, which are the monuments of wooden architecture, including the chapel of St. John the Baptist of the second half of the 19th century.

For tourists, an excursion is conducted in the village, a master class on cooking “kalitkas”, lunch and dinner, as well as a concert of the local folklore ensemble.

The ancient village of Manga is located on the right bank of the river of the same name, in Pryazhinsky district of Karelia.

The distance from Petrozavodsk by road is about 66 km.

The settlement was first mentioned in chronicles in 1563 as “the four-yard village of Manginsky.”

In the second half of the 18th century, a chapel of the Nativity of the Virgin was built on the top of the hill in Manga. The chapel, wooden buildings at the lower part of the hill and the Manga River form a picturesque natural and architectural ensemble.

The chapel is not active and it is usually closed. The village itself can be visited at any time. 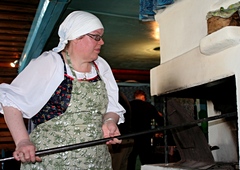 Authentic and unique insight into the local culture

Regarding the sites, the highlights for us were the visit to Kinerma (we have been involved in raising money to restore a traditional barn in our own small village (only 12 houses) so we could empathise with their efforts and problems), and of course the Solovetsky Islands.

My visit in Kinerma touched me very much. It is a delightful village and it was fantastic to meet people and to hear about the history of the place and what is going on. The food was fantastic, and I would like to go back there.

Other sights in: Karelia
The White Sea Petroglyphs
All Sights
Kronstadt