Domenico Tresini, a friend of Peter and a famous architect, elaborated the first plan of the city center. Later famous architects Korobov and Eropkin joined Tresini in development of the general plan of St. Petersburg. The main ideas of their plan were to create three main avenues meeting at the St. Petersburg Admiralty, direct lines on Basil's Island and panoramic embankments on the Neva River.

The construction in the city was continued after Peter I as well. Famous architects, such as Rastrelli, Kvarengi, Rossi and Monferrand created fascinating ensembles of major city squares and streets. Majestic palaces, granite and marble sculptures added to the beauty of the city.

Nowadays all those streets, avenues and embankments, which were built in the 18th and 19th centuries, form the St. Petersburg Historic Center.

1. Nevsky Avenue
Nevsky Avenue and Kazan Cathedral Nevsky avenue (Nevsky Prospect in Russian) appeared in 1710 when two direct streets were built: one going from the Admiralty and another one starting at Alexander Nevsky Monastery. They met in present Revolution square (Ploschad Vosstaniya) where the road to Novgorod the Great started (present Ligovsky avenue). These two parts of the street were built seperately, that is why there is a tiny breaking of the street in the area of Revolution square. The first name of the street was Nevsky Perspective Street, and only in 1776 it received the name of "Nevsky avenue". After the revolution of 1917 the street was renamed, and it became the Avenue of October 25th. But it was still the main street of the city.
The historical name of the street was returned only in 1944. Today this street is very popular among the citizens of St. Petersburg and its guests. The total length of the avenue comes to about 4,7 km. Along this avenue one can observe various architectural ensembles dating back to different historical periods.

2. Palace Square
Alexander Column at the Palace Square, the most grandiose square of St. Petersburg is Palace Square. It is surrounded by magnificent buildings of Winter Palace and General Headquarters. The square was planned when the Winter Palace was under construction. When the Palace was finished the territory of the square was filled with tons of construction garbage. The authorities allowed the citizens to take all the garbage free of charge. The square was cleaned in several hours as thousands of people came to collect the garbage for their household purposes.
In the middle of the square one can see Alexander's Column - a monument to heroes of the war against Napoleon in 1812, created by A. Monferrand. It is the highest column in the world representing granite monolith, which weighs 600 tons. There is an angel on the top of the column. The angel's face has the features of Alexander's I face.
The square witnessed many important historical events such as the Bloody Sunday of 1905, February revolution and October revolution of 1917. In 1923 the square was named after M.S. Uritsky, the bolshevik and head of Petrograd Cheka (secret police).
The historical name was returned only in 1944. Nowadays the square in often used as a place for numerous city events and concerts. 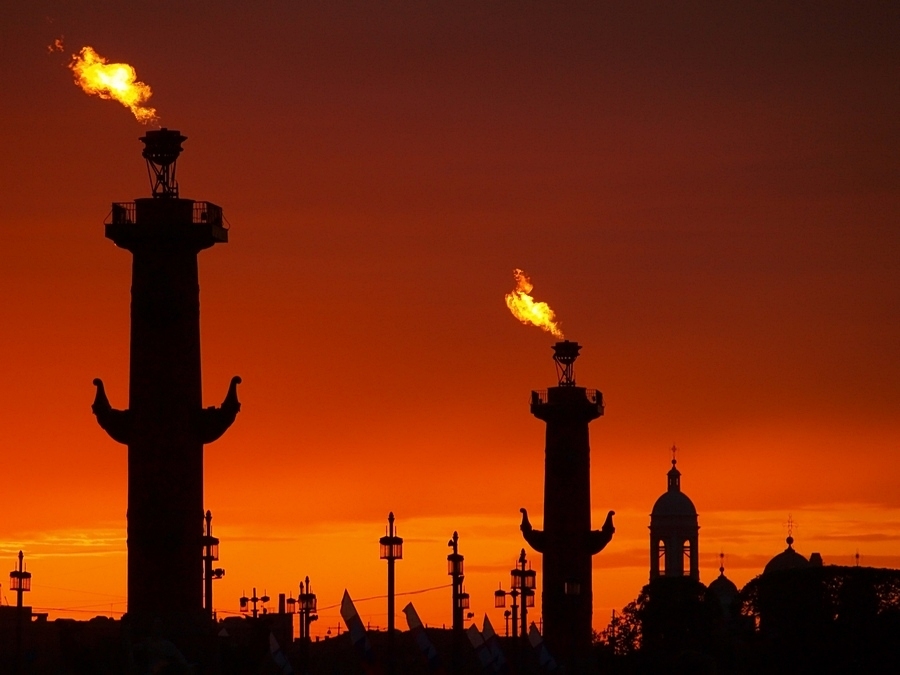 The Spit of Vasilyevsky Island (Basil's Island) is the eastern end of Basil's Island in St. Petersburg. This is one of the most magnificent architectural ensembles of the city. First constructions appeared on the island during Peter's times. Peter the Great planned to create a cultural and business center on the spit. In the first quarter of the 18th century the buildings of the Exchange House, Customs, the Kunstkamera (Cabinet of Curiosities) and of the Academy of Sciences were built on the southern shore of the island. The northern shore remained as a port.
In 1805-1810 the architect Thomas de Thomon used an empty area between two districts for building of a Stock and Commodity Exchange, which was needed due to the economic growth of Russia. It was a big building, created using features of the antique style. In front of the Exchange one can see two rostral columns with the sculptures, which symbolize great Russian rivers: the Volga, the Dnieper, the Neva and the Volkhov. Later in 1826-1832 the buildings of storehouses and customs were added to the ensemble.

4. Field of Mars (Marsovo Polye)
At the beginning of the 18th century the territory of the present Field of Mars was just a small piece of waterlogged land. In 1711-1721 the swamp was drained by means of two man-made canals. The place was named the Big Meadow. At the times of Empress Elizabeth the garden with alleys and trees was laid out on the field, the so called "Promenade". In 1805 the park received a new name - the Field of Mars. It became the main square for military parades. Nowadays there is a tomb to the Unknown soldier with the Eternal flame in the center of the field as well as the memorial, devoted to the victims of the revolution of 1917.

Other sights in: St. Petersburg
Kizhi
All Sights
Solovetsky Islands