Sergiev Posad (during the Soviet period Zagorsk) is a town in Russia, located in about 71 km from Moscow. The town was founded in the 14th century by the Saint Sergy Radonezhsky who was canonized by the Russian Orthodox Church. The most important sight of Sergiev Posad is the Trinity Lavra of St. Sergius, which is enlisted in the UNESCO's World Heritage List.

Sergiev Posad (Zagorsk in Soviet times) is a town in Russia, located in about 71 km from Moscow. The town was founded in the 14th century by the Saint Sergy Radonezhsky who was canonized by the Russian Orthodox Church. The most important sight of Sergiev Posad is the Trinity Lavra of St. Sergius, which is enlisted in the UNESCO's World Heritage List.

This beautiful church is the heart of the Trinity monastery and to some extent the heart of the Russian Orthodoxy. A memorial service for St. Sergius (whose tomb stands in the south-east corner) goes on all day, every day, lit only by oil lamps. Most of the icons were created by the great medieval painter Andrey Rublyov and his disciples, though Rublyov's masterpiece icon of the Old Testament Trinity is a copy, the original one is in Tretyakov Gallery in Moscow.

The Cathedral with its star-spangled domes, was designed in accordance with the cathedral of Assumption in Moscow Kremlin. It was finished in 1585. Services are held here in summer. Outside the western door there is the grave of Boris Godunov, the only tsar buried neither in Moscow Kremlin nor in St. Peter & Paul Cathedral in St. Petersburg. Nearby, the resplendent Chapel-at-the-Well (Nadkladeznaya chasovnya) was built.

The Refectory Church of St. Sergius

The huge block with the 'wallpaper' paint job and lavish interior was once a dining hall for pilgrims. Now it's the winter counterpart of the Assumption Cathedral, with morning services in cold weather.

The Church of the Descent of the Holy Spirit

This little 15th century church (Dukhovskaya tserkov), with the bell tower under its dome, is a graceful imitation of the Trinity Cathedral. It's used only on special occasions. It contains, among other things, the grave of the first Bishop of Alaska.

Treasury of the Trinity Lavra

The Treasury of the Trinity Lavra of St. Sergius is located along the western wall of the monastery just behind the Trinity Cathedral.

During its history the Monastery has obtained a number of unique items which are now exhibited in the Treasury. Many of them were presented by Russian Tzars, including Ivan the Terrible.

The collection includes icons, religious utensils and the church applied art of the 14th-19th Centuries. In the halls of the Treasury one can observe golden and silver chalices, communion cups, panagias (a small icon on the chest), church robes, crosses, ancient Bibles and huge (about 1.5 meters high) silver candle holders.

Tickets to the Treasury are sold in the ticket booth opposite the entrance. However, it happens quite often when the Treasury is closed as there is a tourist group on a sightseeing tour inside. That is why it is recommended to book a guided tour in advance.

The easiest and fastest is to rent a car or hire a taxi and drive along the highway Moscow - Yaroslavl, the distance from Moscow is about 71 km.

Train is another option. There are 2 daily trains between Moscow and Yaroslavl (1 in the morning and 1 in the evening) which stop in Sergiev Posad. Travel time is about 1 hour. Both trains are reasonably comfortable.

Buses from Moscow to Sergiev Posad depart from VDNKh bus station which is located by the metro station of the same name in Moscow. Travel time is about 2-3 hours.

In Sergiev Posad both train and bus stations are located in about 2 km from the Monastery. You can walk or catch the local bus or taxi. 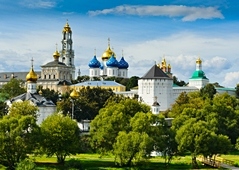