Marble quarry in Ruskeala is an interesting and picturesque touristic object in Karelia.

Not far from the town of Sortavala in Karelia Ruskeala Mountain Park is situated. The main part of Mountain park is Marble canyon.

Marble in Ruskeala was found by Mr. S. Apelius in 1766. Within the next years on this territory mining of four types of marble was organized: ash-grey, grey-green, white with grey veins and white-grey-blue. The mined marble was used during erection of architectural constructions of Saint Petersburg since the second part of XVIII century to the middle of XIX centure, of Sortavala and on Valaam island – since the end of XIX century to the beginning of XX century.

Marble was mined in open quarries and galleries. At present there are three quarries situated along the left shore of Tohmajoki river. They are connected by party flooded galleries and therefore one can see water reservoirs surrounded by marble cliffs. The water in those reservoirs is of diamond colour.

Ruskeala Mountain park was opened for public in 2005. The park has cafés, parking place and toilets. 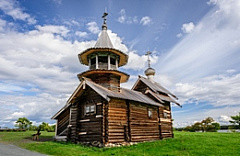 Other sights in: Karelia
Pushkin (Tsarskoe Selo)
All Sights
The White Sea