The city of Petrozavodsk was founded in 1703 and today it is an important centre of tourism in the North-West of Russia.

Petrozavodsk is the capital of the Republic of Karelia and its industrial, educational and cultural center. The city is a starting point for the trips to Kizhi, Kivach Waterfalls, Karelian villages etc.

Petrozavodsk is situated on the western shore of the Onega Lake and extends for the distance of 10 kilometers. Its population amounts to approximately 280,000 people.

In 1703 a cannon factory was built be order of Peter the Great on the shore of the Onego Lake. Simultaneously a small settlement for workers was established which was named “Petrovskaya Sloboda”. The factory developed quickly and produced cannons and decoration elements. In 1777 during the reign of Catherine the Great the settlement obtained the status of a town and new name – Petrozavodsk (Peter’s Plant).

The main street of the city is Lenin Avenue. The avenue goes from the railway station to Onega embankment. There are many cafes and restaurants, administrative and residential buildings. Some of them are notable for their architecture, in particular, the Hotel Severnaya and the building in the style of northern wooden Art Nouveau opposite the hotel. From Lenin Avenue it is easy to get to the historical part of the city and to Lenin Square (former Round Square).

Historical buildings built in the end of 18th Century are situated on Lenin Square. Now one of them hosts the National Museum of Karelia. Earlier, in the center of the square there was a monument to Peter I, now - a monument to V.I. Lenin, erected in 1933. The memorial "Eternal Flame" is located in the square.

After leaving Lenin Square we enter Karl Marx Avenue (one more geographical denomination of the Soviet period). Formerly this street named English Avenue. The reason for that was the fact that Catherine the Great invited foreign engineers to work at the newly built cast-iron foundry (the former cannon factory was destroyed by flood) and the majority of them were Englishmen. Many of them settled on this street and therefore it was named so.

Karl Marx Avenue leads to Kirov Square. Till 1918 this square was called Cathedral Square. There was a monument to the Emperor Alexander II and three cathedrals.

Then we proceed to the embankment.

At the beginning of the Onego Embankment we see the monument to Peter the First. The city founder has ceremonial full dress on. His right arm points to the mouth of Lososinka River wh ere the first cannon factory was founded in 1703. Initially the monument was situated on the Round square (Lenin Square) but after the revolution it was substituted by Lenin monument.

Petrozavodsk has several sister cities and on the embankment we can observe the gifts presented to the city on their behalf – unusual sculptural compositions created by modern architects from various cities such as Duluth (USA), Varkaus (Finland), Umeo (Sweden), Mo I Rana (Norway), Neubrandenburg and Thubingen (Germany), La Rochelle (France).

1. National museum of the Republic of Karelia.

The museum is situated in the historical building in the center of the city. Its exhibition is devoted to nature, archaeology, history, folklore and ethnography of Karelia.

2. Museum of Fine Arts of the Republic of Karelia.

The museum’s exhibition includes works of Russian art since XVIII – till the beginning of XX Century, decorative-applied art, art of XX Century, Old-Russian art and Karelian art of XX Century. Among the exhibits there are works of famous Russian painters including I. Shishkin, I. Levitan, I. Aivazovskiy and V. Polenov. Also are presented works on the subject of “Kalevala” – the world famous Karelian-Finnish epos, by Tamara Yufa in particular. The collection of North Russia icons is also of great interest.

This small private museum was created in 1999 by Tatyana Kalinina. The exhibition is based on the collection of handmade dolls – nixies, female hobgoblins, mermaids, house spirits brownies and other fairy tales’ characters and “Karelian ghosts”.

We arrange private transfers to Petrozavodsk from Finland and St. Petersburg.

Travel time between Helsinki and Petrozavodsk is about 12-14 hours. Our driver will pick you up at your address at your desired time.

We arrange transfers between Joensuu and Petrozavodsk by a private taxi (car or minibus).
Travel time is about 6-7 hours. Our driver will pick you up at your address at your desired time.

Saint Petersburg is located in about 450 km from Petrozavodsk, travel time between the cities is about 6 hours.

International and domestic flights to Petrozavodsk arrive in Petrozavodsk airport (PES). It is a military airport, part of which is used for passenger flights. The airport is also called "Besovets" by the name of a settlement nearby, where Petrozavodsk citizens have their dachas (summer cottages). The distance between the airport and the city is about 25 km.

Petrozavodsk railway station is situated in the center of the city, and it is possible to use public transport to get to the hotel. We arrange meeting and transfer by car or bus. 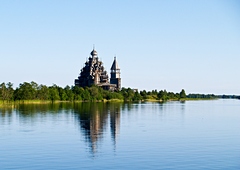 Day Tour to Petrozavodsk and Kizhi

Easy trip to Kizhi from May till October 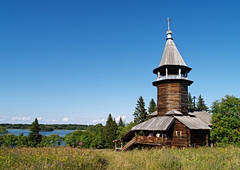 I used Nordic Travel to take me from Helsinki to Petrozavosdsk and then onto a business meeting in Segezha. I was collected at my hotel near Vantaa airport , and driven in a very comfortable mini-bus to Petrozavodsk with a most courteous driver who assisted with border crossing into Russia. I stayed overnight at a pleasant hotel in Petrozavodsk , and was driven to Segezha the next morning. ( The hotel was also arranged by Nordic Travel ). The return journey was the same , and I can thoroughly recommend Nordic Travel .

Other sights in: Karelia
Moscow Kremlin and Red Square
All Sights
Murmansk