The fortress was founded by Peter the Great in 1703 to protect the new city of St. Petersburg.

Peter and Paul Fortress was founded in 1703 as a war fortress, during Russia’s involvement in the Great Northern War with Sweden.

The island where the fortress was built has a strategic position in the mouth of the Neva River allowing to control the ships entering the river from the Gulf of Finland.

According to historical documents, 20 thousand people, including captured Swedish soldiers, were involved in the construction of the fortress.

The original fortress plan was developed by the French engineer Joseph-Gaspard Lambert de Guerin. It was made of earth and wood but after several floods Tsar Peter the Great decided to build a stone fortress.

In 1706 Peter the Great invited the famous architect Domenico Trezzini to conduct the construction. The width of the walls was 5-6 meters and their height came to 12 meters. Each bastion was equipped with 50-60 cannons. Nowadays the Fortress is the only surviving fortified structure in Europe built in strict accordance with the bastion system.

Since the beginning of 18th century a midday shot has been fired from the Naryshkin Bastion of the Peter and Paul Fortress. A certain number of shots from the walls of the fortress were done to announce the beginning and ending of work shifts, or the risk of a flood, or receiving guests of honor. The old tradition to fire a midday shot still exists.

The Fortress was used as a base for the city garrison and also as a prison for noble and political prisoners.

In 1849, the famous writer Fyodor Dostoevsky spent eight months in the Fortress, where he was imprisoned as a member of a political conspiracy.

In the Peter and Paul Fortress, the so-called “Princess Tarakanova” was kept and died in custody. She pretended to be the daughter of Empress Elizabeth Petrovna and wanted to get the Russian throne. Some visitors of the museum claim that her ghost still lives in the fortress.

The main Cathedral of the Fortress is called Peter and Paul Cathedral. It was built in 1712-1733. The construction of the cathedral was started with the building of the bell tower. The total height of the bell tower, including the figure of St. Petersburg’s Guardian Angel on the top of the spire, comes to 122,5 meters. It is still the highest architectural structure in the centre of St. Petersburg.

Russian Emperors from Peter the Great to Nicholas II (except for Peter II and Ivan VI) are buried in the Peter and Paul Cathedral. The last burials were carried out in 1998 and in 2006. In 1998 the remains of Nicolas II and his family were brought to Saint Petersburg and buried in the Cathedral. In 2006, the coffin with the remains of Empress Maria Feodorovna, Dagmar of Denmark, was transported from Denmark and buried in the Peter and Paul Cathedral, next to the tomb of her husband, Emperor Alexander III.

Since 1724 St. Petersburg Mint has been functioning on the territory of the fortress. At the end of the 18th century, in order to modernize the Mint, the government purchased a rolling mill, a steam engine and other equipment from the British industrialist Matthew Boulton. All this significantly improved the quality and increased the number of minted gold and silver coins.

Nowadays almost all buildings of the Fortress belong to the Museum of St. Petersburg History.

The Museum of Cosmonautics and Rocket Technology is also located within the fortress.

From 01 October till 30 April the museum complex is closed on Wednesdays.

Timetable is subject to change without prior notice. 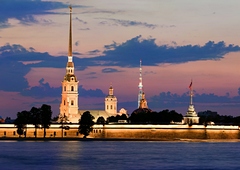 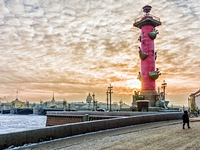 The tour covers most famous sights of the city center.