The town of Kronstadt is located 40 kilometers from Saint Petersburg on the Island of Kotlin in the Gulf of Finland and it is famous for its naval history.

Kronstadt is a sea port, which is located on the island of Kotlin in the Gulf of Finland. Kronstadt is connected with the mainland by the dam, which has a highway.

Nowadays Kronstadt is an administrative district of St. Petersburg. The population of the town comes to about 43 thousand people.

In 1990 the central part of Kronstadt was included into the UNESCO's World Heritage List as a part of the Historic Center of St. Petersburg and its monuments.

In 2009 Kronstadt was honoured with the title of the "City of Military Glory".

The history of Kronstadt is closely connected with Peter the Great and with the foundation of St. Petersburg. During the Great Northern War against Sweden Peter the Great managed to conquer the coastline of the Gulf of Finland in 1700-1703. Although he was quite successful during the war campaign, he could not sail into the Baltic Sea due to the fact that the Swedish ships protected the way out of the gulf. Only in autumn of 1703 when the swedish ships returned to their non-freezing ports Peter the Great got the chance to approach the island of Kotlin. After making some measurements near the island Peter I came to a conclusion that the island can become an ideal fortification to protect the entrance to the gulf by St.Peterburg. At his command the first fort was built on the island in 1704 bearing the name of Kronslot, and today this year is considered to be a birthday of Kronstadt. The location of the island was so convenient, that not a single enemy ship could sail through without being noticed or attacked by the cannons of the fort.

Later in 1724 a new more massive fortress was built on the island and the settlement was named Kronstadt, which means "the fortress city". Since then the town of Kronstadt has become the main naval base of the Baltic fleet and the construction of fortifications was continued.

Due to the constant floodings many structures did not live long life. The town was reconstructed many times. The naval hospital, the arsenal, several maritime schools were built on the island in the 19th century.

During WWII the town of Kronstadt was constantly bombed by the German airforce, which broght a lot of damage to architecture of the town.

After the war the town of Kronstadt became a closed city both for Russians and foreigners.

Only in 1996 it was opened for free admittance. 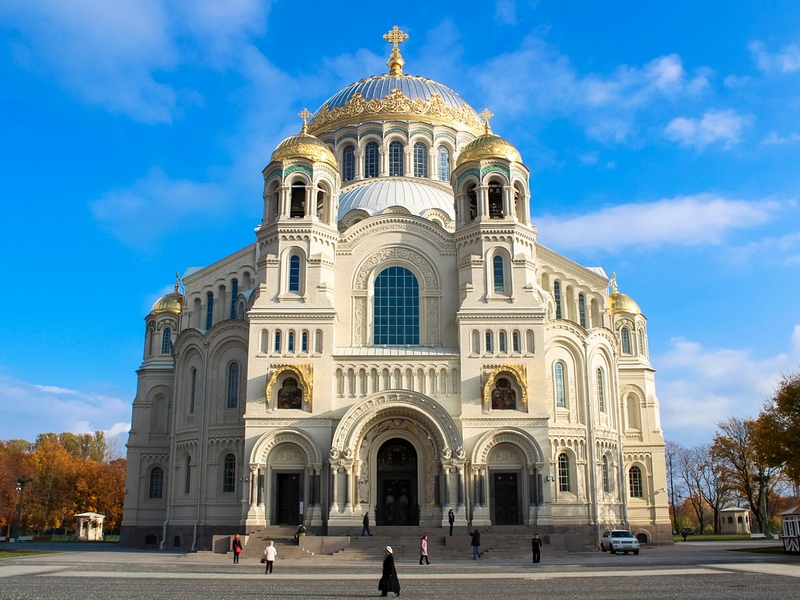 of Kronstadtis the Naval Cathedral of St. Nicholas. Today the Naval Cathedral of Kronstadt is the main sight of the town. The idea of building the cathedral appeared already in the 1830's. But only at the end of the 19th century the project was approved by the Russian Emperor and the authorities started collecting donations for the construction. According to the plan the cupola with the cross was to become a landmark for the ships coming to St. Petersburg.

The plan of the Naval Cathedral is very similar to that one of St. Sophia Cathedral in Constantinople. The construction was finished in 1913, the cathedral was consecrated and opened to the public. After the revolution of 1917 the services continued in the cathedral, but only till 1927.

Later the cathedral was converted into the cinema theatre named after Maxim Gorky. During World War II it was closed; the dome received three direct artillery hits.

Post-war reconstruction of 1953—54 finally converted the cathedral to a functioning concert hall.

In 1976 it became a part of the Central Museum of Navy.

In 2002 the cross was reinstalled on the dome of the cathedral. The church is under restoration at the moment. The reconstruction was finished in 2013.