Franz Josef Land is an archipelago located in the far north of the Russian Federation. The Land is situated in the Arctic Ocean to the north from Novaya Zemlya and to the east from Spitsbergen (Svalbard).

The archipelago is volcanic, and is composed of Tertiary and Jurassic basalts, and though it is covered mostly with ice it has outcroppings covered with moss and lichens.

The northernmost point is Cape Fligely on Rudolf Island. The archipelago is located about 1050 km from the North Pole, closer than all other places except for Canada's Ellesmere Island and Greenland.

Franz Josef Land. The officially recognized discovery took place in 1873 by the Austrian polar explorers Payer and Weyprecht, who named the new land in honour of the Austrian emperor Franz Joseph I. As the expedition was only privately sponsored and not official, these islands have never become a part of Austria. In 1926 the islands were added to the Soviet Union, and a few inhabitants came for research work and military purposes.

During the Cold War years, the polar regions and became key strategic locations. The islands were declared one of many national security areas from the 1930s to 1991. An airfield was built at Graham Bell Island to serve as a staging base for Russian bomber aircraft, and training missions were quite common between Franz Josef Land, the mainland, and Novaya Zemlya (New Land). The first cruise ship visited the islands in 1971.

The climate is quite severe on the islands. The annual average temperature is -12.8 °C (in January -15 °C and in July 2.2 °C). Fog is very common on the islands in the late summer.

The wildlife of the islands consists mostly of Walrus, Arctic foxes, and Polar Bears. There are 37 bird species on the territory of the archipelago. Common birds include kittiwakes, fulmars, and gulls. Beluga whales can be often seen in the surrounding waters. Caribou antlers have been found on Hooker Island, and there are guesses that herds reached this point up to about 1,300 years ago during a warmer period. 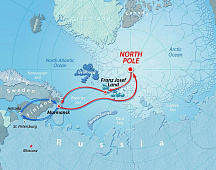 Icebreaker Expedition to the North Pole

Voyage to the North Pole

Other sights in: Arctic
Kirillov Monastery
All Sights
Kivach Waterfalls and Nature Reserve