The season of river cruises in Russia begins in late April and ends in mid-October. Motor ships of various categories and passenger capacities operate on rivers and lakes, including modern 5* motor ships.

Popular routes and ports of call.

Cruises between Moscow and St. Petersburg. The most famous route in Russia. During this tour you can visit different cities and places of interest such as Uglich, Yaroslavl, Plyos, Kirillo-Belozersky Monastery, Kizhi, Petrozavodsk and Mandrogi.

Cruises along the Volga River between Moscow and Astrakhan. A beautiful route with visits to Uglich, Yaroslavl, Kostroma, Nizhny Novgorod, Cheboksary, Kazan, Samara, Saratov, Volgograd and the Volga delta.

Cruises from St. Petersburg to Valaam and Kizhi. These cruises last from 2 to 5 days and include the island of Valaam in Lake Ladoga, Alexander Svirsky Monastery, Kizhi Island and the tourist village of Mandrogi.

Cruises along the Yenisey River. Travel from Krasnoyarsk to Dudinka or vice versa. Stops in Yeniseisk, Igarka and numerous Siberian villages. Acquaintance with the traditions and culture of Cossacks, Old Believers and indigenous people of the north. You can get to Norilsk by land from Dudinka, and then continue to the Putorana Plateau.

Cruises along the Don River. Visits to Rostov-on-Don and the Cossack villages, Taganrog, Azov, passing through the Volga-Don Canal.

River cruises along the Kama River. The cities of Sarapul, Chistopol and Perm.

Cruises along the Oka River. Konstantinovo, Ryazan, Murom and Kasimov.

Cruises from Arkhangelsk along the Severnaya Dvina River by the steamboat Nikolay Gogol built in 1911. 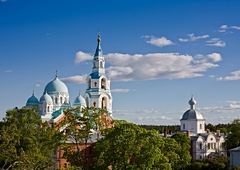 Voyage from St. Petersburg to Valaam in Ladoga Lake